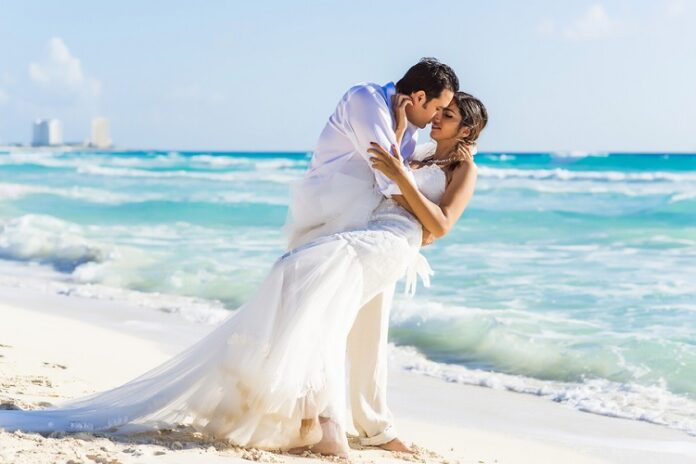 Trash the Dress wedding photography, also known as Fearless Bridal or Rock the Frock, is on the rise!

It is claimed by some that the trend started in 2001 by wedding photographer John Michael Cooper. However, Hollywood has been symbolically destroying wedding dresses since at least October 1998 in the show Sunset Beach, since which the style has spread around the world.

The up and coming wedding trend, now most popular in the UK, involves posing for the camera in various unclean places. Popular choices include frolicking in the sea and rolling about on the sand with your new hubby, taking a dip in fountains or pools, riding on horseback together into the sunset, and most extreme of all, setting yourself on fire!

All things that would traditionally be avoided at all costs in order to preserve one of the most important items of clothing you’ll ever buy (as well as avoiding some major safety hazards). In some more playful and artistic cases of Trash the Dress photography women allow the groom to throw different coloured paint over them, adding colour to the mass of white material.

This trend is not a religious or symbolic practice, but more of a ‘why not?’ mentality. Although it can be made symbolic on a very personal level, for example throwing each other’s favourite colours at one another until you’re both a mixed mess of the two, representing ‘becoming one’. A wedding ceremony that is actually fun! Doing this instead of something like a sand ceremony is also potentially less embarrassing, especially when the sand refuses to come out and instead sticks in the bottom of the tube. Throwing paint at one another is pretty unscientific and easy to accomplish (just remember to avoid the face) and can make for some great artistic action shots.

It’s understandable that a lot of women would be appalled at the idea of the dress that they’d spent months picking out and which cost them an arm and a leg would be ruined. It’s hard to imagine how many women out there would set themselves on fire either!

But, why are we so precious with these dresses? Is it because there are plans to wear it in the future? It seems unlikely somehow. It will sit in our attics or airing cupboards sealed from the world. Maybe you’re hoping that your (future) daughter might wear it one day? Are you wearing your mother’s old dress? Well then, don’t rule it out. Enjoy the day to its fullest and don’t worry about the grass stains. The Pinterest site from Brideheaven has many fun examples of this kind of photography, so go and check it out!

Don’t forget you can always do the clean, tidy and pretty photos first!

How to Build the Perfect Online Photography Portfolio

How to Get Started in Social Media Marketing